Rise of Ashoka and study of Mauryan Empire

details of Ashoka the Great and his rules of Dhamma and Mauryan administration.
By Siachen Team | Saturday, December 10, 2022

Rise of Ashoka and Mauryans Administrations

Some rules of Dhamma:

Ashoka appointed DhammaMahamataras (Illuminati people) to check whether people following the rules or skipping it and if anybody not following it , then they will be severely punished(Hypocrisy at its peak), at one end he talks about non violence and at other end he talks about punishment.

Note : Late CM of Andhra Pradesh NTR appointed Mahamatras to check the corruption in his Cabinet

Symbol of dhamma is 24-spoked wheel

Some Reason for the Downfall of Mauryan Empire

Mauryan Empire is divided into 4 provinces

3 important officers in Districts( Districts are called as Aharas)

Lowest officer is Gramany(Head of the village)

Pliny is from Rome Italy, wrote a book called Natural History, latin language and wrote about the strength of mauryan military strength.

6 boards in Wars council are:

Indica says about the city Administration, it talks about Pataliputra, Ujjain, hastinapura, and taxila and others

Again there are 6 boards for administering the cities and again each board consists of 5 members each.

Boards for administering the cities:

Taxes in the Mauryan Administrations 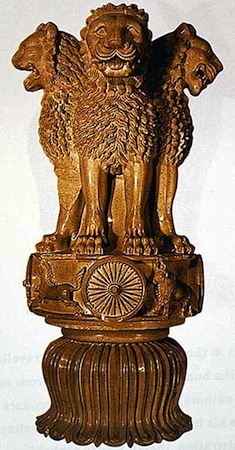